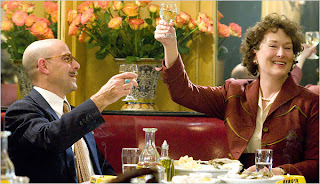 Early this year, All About Fifth interviewed Moutarde’s owner, Bruno Berrebi and learned, among other things, about the restaurant’s plan for renovation in August. But the restaurant has clearly been as open and popular as ever. The latest? According to Berrebi, the popular bistro’s renovations will be delayed until this fall (likely end of September) due to a delay in custom parts from Paris. Sounds intriguing. We are not the only ones eager to see the changes afoot in the restaurant (which served as one of the local on-site locations in upcoming film Julie & Julia). A hint of what’s to come? The current bar will be divided into two sections. One part for, well, alcohol. The other, for charcuterie and fromages—a Parisian new trend. Bon appétit. (Pix from NYTimes)
Posted by All About Fifth at 1:35 PM

Email ThisBlogThis!Share to TwitterShare to FacebookShare to Pinterest
Labels: Julie and Julia, moutarde