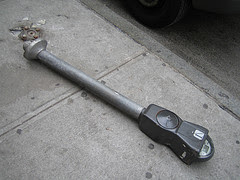 In May, a sizable portion of Park Slope's Fifth Avenue became part of a city DOT pilot program called "Park Smart" which raised the metered parking rates along the avenue in hopes that parking spaces would turn over more quickly.

Thus far, the program appears to be a success; reducing space occupancy and creating more room for cars and trucks to park along the avenue. Rumor has it, though, that DOT is already planning to raise the rates again to $3.00 an hour (a rate that they have already implemented in Greenwich Village)! Merchants are concerned that this second increase in just a few months will drive customers away from the avenue at a time when they are struggling the most.


5th Ave and 7th Ave are the life blood of our commercial strips. These are the arteries that bring us business and as long as people are still using cars, we must be sensitive to the fact that parking is a need. Astronomical meter rates are not the only thing that can be done to improve transportation in a community, they are just the easiest and cheapest with the most potential for having a detrimental effect on our merchants.

So, what would you think about parking meter rates rising to $3.00 an hour on 5th Avenue?