This Friday: Carol on Fifth! 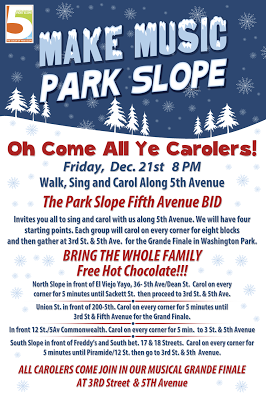 This Friday, December 21, the Park Slope Fifth Avenue BID invites you to sing and carol along Fifth and end up in Washington Park (Fifth Avenue between 3rd and 4th Streets), near the Old Stone House.

There will be four gathering points:

Hot Chocolate and Apple Cider will be served! Come on down and carol, Park Slope!
Posted by All About Fifth at 4:58 AM