Have Laptop, Will Annoy? 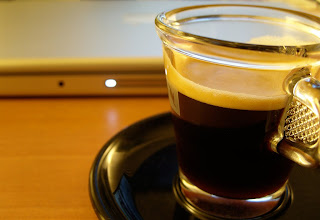 This week, the first shots in the "free wifi" war may have been fired by New York Times technology blogger Nick Bilton, in a piece about some new restrictions he has found on computer/ipad/ereader use in coffee shops throughout the city.

The "sandwich shop in Brooklyn" referenced in the post (which is withholding tables from laptop users between 12 - 3 pm, aka lunch time) is none other than Fifth Avenue's sNice. In defense of their new rules, an owner of sNice wrote to Effed in Park Slope and said:

Here’s how it went down about a year and a half ago: noontime rolls in and nearly every freaking table is occupied by a single person on a computer (there’s fourteen of them—I counted!). My capacity is cut in half because they don’t want to sit with anyone else and no one wants to sit with them. A family comes in who wants to eat and I spot a single empty table so I ask the woman on her computer at the next table does she mind moving so this family can sit together and she says yes she does mind! I was flabbergasted. And that evening my husband and I decided that we needed to do something about this.

It's hard not to notice that a lot of Park Slope residents use Fifth Avenue establishments like sNice, Gorilla Coffee and Ozzie's as their office away from home. Sure, they are paying customers who are often loyal to the establishment they visit. But, in these difficult times, are they overstaying their welcome? Is this the beginning of a new trend? A new community rift like the stroller wars? Or, is it much ado about nothing?

Let us know what you think.
Posted by All About Fifth at 12:00 AM