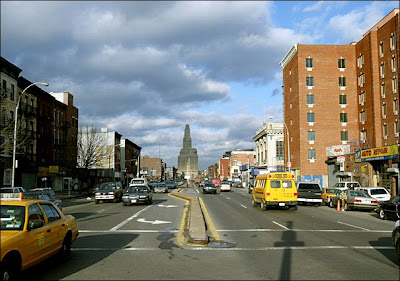 On Saturday, November 6th the Park Slope Civic Council hosted “Moving Forward on Fourth,” a walkabout to discuss the evolution of the Avenue.

All About Fifth caught up with Josh Levy, Civic Council Trustee and lead organizer of the event, to ask how things went.

AAF: Thanks for talking to us. Why, in your opinion, is 4th Avenue such an essential Brooklyn corridor?

Levy: 4th Avenue is an important Brooklyn corridor that runs 6 miles, connects 5 very different & diverse neighborhoods and is book ended by the great Verrazano bridge to the south and the Williamsburg savings bank building, one of Brooklyn's tallest, to the north. Also, because it serves as an important transportation conduit accessing the BQE, Prospect Expressway, L I R R and major subway lines it's a natural choice for future development.

AAF: I imagine that there is a wish list for 4th Avenue and there is a "reality" list. Setting the wish list aside for the moment, what can residents expect in the next year or two in terms of change along the Avenue?

My read is that given the current state of affairs in the commercial real estate and development lending universe, I fear that no major or substantive building or development will be taking place in the next year or two - lending terms are far too prohibitive. Needed but draconian government budget cuts aren't helping either. For the near term, well have to make do with scaled-down (but fully-cash funded) projects less grand in scope and smaller, incremental improvements that we can implement (as a community) at little cost. The initiative to convert the 4th St .cul-de-sac west of 5th Avenue into a pedestrian mall / piazza is a good example.

AAF: The walkabout was billed as a chance for the community to voice their say-- what concrete and official avenues does the community have to weigh in on the future of 4th?

Local City Council Member’s offices (in our case Brad Lander and Steve Levin) represent great resources as they are much more influential than you might expect. Same can be said of our local community board (in our case CB6). And lastly but very importantly joining with your local neighborhood advocacy organization (in our case the Park Slope Civic Council – www.ParkSlopeCivicCouncil.org) is a great hands-on way to play an active role in the future evolution of the neighborhood.

AAF: From having lead the event and spoken with residents, what is most on the community's mind vis-a-vis 4th?

AAF: What is the next step for the Park Slope Civic Council in terms of the future of 4th Avenue?

Definitely more follow up. We are already beginning to plan for our next initiative and we are also planning to form dedicated ad-hoc task forces (and other outgrowths of the Park Slope Civic Council) to coordinate directly with CB6 / City Council and perhaps willing Real-Estate developers on matters relating to 4th Ave.

*image taken from Wired New York: Rezoning, and Redefining, Park Slope. By ALAN S. OSER
Posted by All About Fifth at 1:00 AM