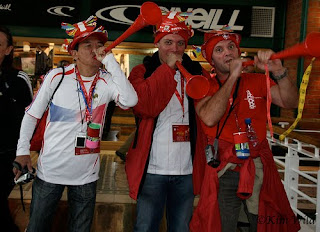 Have you caught World Cup Fever yet? If so, there might just be a venue on Fifth Avenue for you to root for your favorite team/nation.

This week, the New York Times published an interactive map that tells you where to watch the game, based on the flag that you wave. On Fifth Avenue, Loki Lounge was identified as a hot spot for fans of Argentina's national team. The Black Horse Pub, of course, is a favorite spot of football fans from England (it must have been a sad place to hang out on Saturday).

Still, we couldn't help but think that the Times' map is a bit incomplete. There have to be more places in the city that act as a sort of home base for fans of a particular nation's club, no? Hell, there are probably more along Fifth Avenue!

If you know of any spots on Fifth that the New York Times missed, let us know in the "Comments" below and we'll publish them as an update to this post.

Photo via Flickr
Posted by All About Fifth at 12:05 AM